Home Richard the Third About Us Programme Contact Us Members Area 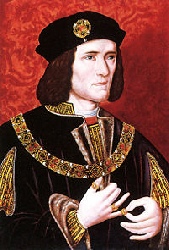 Richard III, the last Plantagenet king, was crowned in 1483 following the sudden death of Edward IV. Richard, known more for good sense and restraint than his high-living brother, lasted barely two years before being turfed off his throne, and his horse, at the Battle of Bosworth in 1485. Shakespeare, who it must be remembered was working for a Tudor monarch, painted Richard’s character as dark as the malmsey wine in which his brother, the Duke of Clarence, was drowned; but in reality he was very different from the child-murdering, hunch-back bogeyman of Tudor propaganda. Richard was a brilliant military tactician, a loyal deputy to Edward and a reformer. In an ultra-short reign he did more for medieval human rights than most of his predecessors put together.  He founded the Council of the North to look after the economic rights of common people, which were meagre enough in a 15th century, London-centric economy. In 1483 he began an early form of legal aid for those who could not afford representation and he instigated a system of bail we would recognise today. But as he took to the field at Bosworth to quell yet another rebellion, he was in the throes of great personal grief, having recently lost both his wife and son, and he vowed that day to “make an end either of war or of life”.’

Excerpt from The Times 4th July 2011 re. Production at the Old Vic

In praise of ... Richard III

Help...! We need some more contributions about Richard. Please contact the Chairman or the Webmaster via the Contacts page.

The Trencherman Newsletter was produced by Tracy and a pdf version may still be downloaded here.